Since here is no single guide to what different numbers mean when used by satanists or the enemy I decided to take the time and collect as much information on the subject as I could. Here might be some lacking information, feel free to add more. The sources are listed below the article.

"The number one is the number of the undivided, the eternal, the permanent, the 'all that is', basically. This is the formless, the Aether, the void that permeates all creation. It's at the same time, all potentiality. In other words, everything begins with the "One". This is the god-force that is everywhere in creation. Essentially, this is not even 'god', but the all-pervading power of nature, so to say."
"Creation does not start with the "ONE". It starts with TWO. As thus Satan has been given the "Two" and was called the "Evil one who Divides", but also at the same time, the ultimate Creator of the Cosmos and perceived reality. This is also the symbolism of the Serpent. It divides and brings together at the same time. The Satanic Serpent is the whole, and the division at the same time."

Five relates to the five elements.

Six is a number of slavery, Saturn the planet of misfortune, frequently used by the enemy. Note biblical "god" rested on the seventh day, six days are days of work - number six means a person without spiritual power. It falls short on the perfect number 7. 42 (4+2 = 6) names of yhvh.

Seven is a number of perfection, major chakras.

Eight is a number of infinity, eternity and immortality. Astarte's eight-fold path. Also number of violence, used by the enemy in quran.

11 is number of destruction commonly used by the jews it falls short on the biblical perfect number 12.

13 is the number of Shiva and how this activates the 13 major chakra's of the Light Body. (13 main chakras, 13 signs of Zodiac [including Ophiuchus], 13 months in Lunar calendar. The more smth is ingrained in Nature; the more power it derives from the Earth. The 13 is one of the most ingrained in Nature numbers, which makes it one of the most suitable for global affairs that require major Earth/universal powers.)

22 is kabbalistic jewish number of completition. 22 names of god, amount of chapters in the book of revelations

33 relates to the vertebrate of human spine. 33rd degrees of freemasonry.

40 (4+0 = 4) is a number of Satan originating from Egypt. This is related to Moon cycle. In enemy text 40 is kabbalistic number of their messiah.

72 demons of Goetia, names of jewish "god", decans of the Zodiac

108 is a number of power (54 is Shiva + 54 of Shakti), 216 is more powerful. "108 relates to the material realm physical time in the east I suspect 216 relates to the union of the astral and material realm." Note catholic rosary is 54, half of original eastern rosary consisting of 108 mala beads.

666 is the number of perfection, solar chakra, godhead and Satan. Kabbalistic square of the Sun. Temple of Solomon (Sol, Om, On all means Sun).

144 000 relates to the nadis (energy channels) of human soul. Corrupted in the biblical book of revelations into a number of chosen jews.

Fuck. I re-read the source links and noticed that I made a mistake on number 3. Disregard the quote, it isn't about number three used in numerology but Maxine using a three-part list.
Top Good topic, a way to see what numbers means is to look at the astrological houses and their meaning.
Top

Thank you for sharing this work!!
http://www.donblankenship.com
Top

Bible: Book of Jewish Witchcraft Article Series: Sermons from the Joy of Satan Ministry on the Topic of Jewish Abuse of Witchcraft and Numerology
http://web.archive.org/web/201603092213 ... Series.pdf


Pan meaning "The ALL" also relates to the number One and Ten. Satanama in Sanskrit also relates to the number 100 which is 10 to its highest power 100 showing the power of the number 1, 10 and 100 to its full expressions. This number in the east is given to the crown chakra. 10 relates to the doubling of 5 which is the power of 5 as well. The number 10 contains all the scale of numbers of male and female within itself and measure the full dimension of the universe, all numbers are made from those contained in 10 and numbers are manifestations of vibrations of astral light that materialize all reality from the subtle to the dense of which 10 is the whole of all the permutations. The mantra and mundra for Satanama relates to this in description of the 10. These specific numbers are based on the full power of the Universal Life Force, in the Far East 10 is the number of the universe. The opening of the chakra's of the head relate to the 10 the connection into the entire universe of astral light. 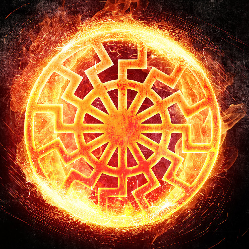 Good info, brother. Thank you for compiling all this info.

However, some of it is outdated.

22 is a multiple of 11 which is a number of destruction. So if I'm correct, 22 should also be a pretty negative number.
Formerly Peppermint Taco on the forums only.
Nihai RTR/Final RTR:
PDF
Tek Sayfa/Single Page
Boyanabilir/Paintable
Normal Sürüm/İndirin
Boyanabilir sürüm için Soaring Eagle 666 Kardeşimize teşekkürler!/With thanks to our Brother Soaring Eagle 666 for this version!