I became a Satanist(I did the ritual, at a time the angelfire site was still up) around 6y ago.
I after I did the ritual i dedicated myself on trying to expose Monotheistic lies starting with my Parents, which went not so well, they believe Satan, as you can probably guess, to be an Evil entity and weren't willing to listen.

About a Year later something strange happened. A former friend of mine tried to Make me believe in Islam, and I actually did believe him. He used some kind of Audio Sermons I had to listen too (recitations of the Koran, and some guy talking about the meaning) and I guess it was a Curse of some sort I even stopped talking to Satan and Lilith (I like those too the most I guess, I've got too limited knowledge of other Demons, and I like to know those I talk too).

Eventually though I broke free of those Chains tried to find something to cure my mind because whenever I tried to think or talk "My beloved Lord Satan" my Mind would actually say "Allah" but i luckily somehow came over that too.

If you know what curse could be involved in here and a ritual to get rid of it i would be thankful for it, I tried to get in contact with High Priestess Raasi thought she could be an expert for this but I couldnt seem to find her.

After those events I got back to Satanism but I couldnt find the JoS site.

I tried what little knowledge I had and some Videos on YouTube, promising to Open the Third eye in 45 Minutes through suggestive Hypnosis. I wanted to be able to finally see and meet them, something that seems important to me. Didnt work.

What is important too is that I am a Lucid dreamer, I met Demons in my Dreams I know they arent evil, and I can feel demons but I lack the Ability to See them and I can only hear them sometimes.

I was looking up on the Ritual Page because I think my Case is rather special and I fear Satan left me after the thing with Islam happened, but I didnt find anything about the ritual that relates to my Case.

I just feel the Urge to do the Ritual again because I feel like I betrayed Satan big time. He made me see through the Lies of The Christians Jews ,I fell for the Spell of the Koran, broke free from it with what feels like the Help of Satan, and I just feel like have to do something for him. The things I could need some help with:

-Opening the Third Eye
-Finding out if and how I got Cursed and how to reverse that
-Any "extras" I can do for Satan, or the Demons in General
-A way to make up for the Past events, because it haunts me.


As you have probably seen my Signature, I am mad at Humanity, but not everyone. I saw how much lies and other destructive behaviours people did,how openly they deny truth even if it spits them in the eyes, act irrationally hostile towards me sometimes and I just never found someone who didn't broke my Trust at some point except Demons.

Especially Lilith gave me alot of advice in my Dreams in times of need. Vague advice but accurate enough that I could figure it out.
That's why I started to fight fire with fire. I am a very Stubborn Person and I won't just sit there, idle and watch this. 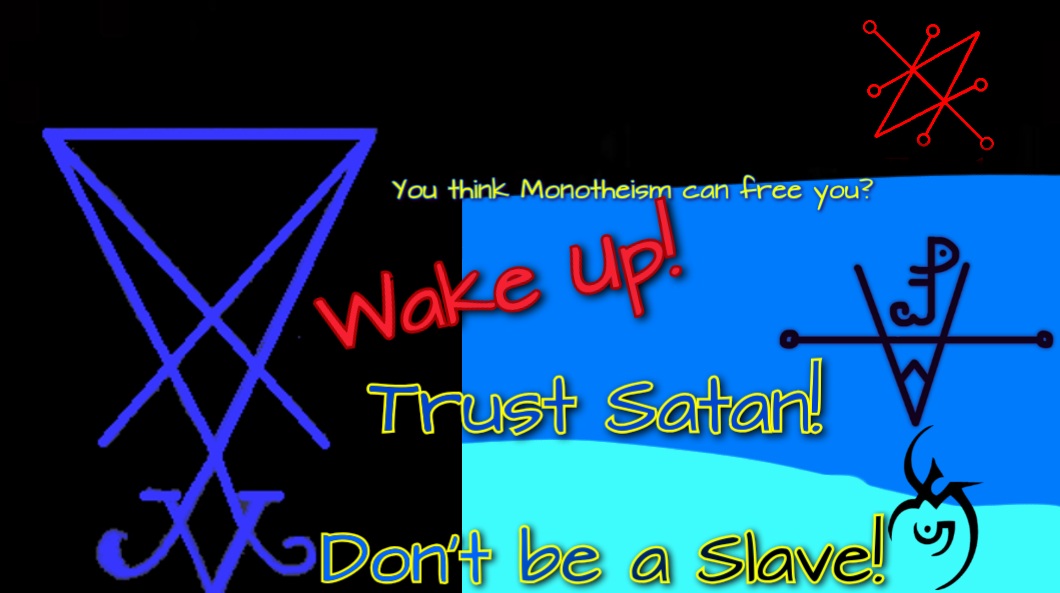 Look, if you have been dedicated for 6 years, and all you do is try to waste Satanic time on discord, you need to get serious about this religion, and start devoting time to personally meditate, and stay in these forums to learn.

That's what the Gods require of you, to do meditation, the RTR, and get a better and more advanced person. That's it. Not waste yours and other SS time in Discord and other bullshit, which teaches you nothing.

I disapproved your other messages, but because I think you are being honest, I approved this one. Please take my advice to you seriously, and get down to work on yourself and self improvement.
| Joy Of Satan Websites Uptime Monitor https://uptime.theyknow.in/uptime.html

I'll thank you Hoodedcobra for your direct words.
I've just got a single question. I was searching for runes,
Real runes not some Hollywood crap,
But I cant find anything reliable and the following JoS site for Runes seems to be down
https://www.evilgoy.org/www.angelfire.c ... mbols.html
Is there an alternative?
Hail Satan and every other Demon God! <3

RayAkuma wrote:I'll thank you Hoodedcobra for your direct words.
I've just got a single question. I was searching for runes,
Real runes not some Hollywood crap,
But I cant find anything reliable and the following JoS site for Runes seems to be down
https://www.evilgoy.org/www.angelfire.c ... mbols.html
Is there an alternative?

Oh and I wasted a lot of time at the beginning too to be honest. The only way you can make up for it really is to seriously start doing the RTR each day preferably at least a couple times and Meditatating. There is no other way and there is no real reason to feel shame over what you did or guilt or anything that helps nothing and leads to more problems as Maxie said see viewtopic.php?f=24&t=23691&p=102196&hilit=Feeling+sorry+Maxine#p102196 you should do is just start being serious each day and improve your life fight for Satan and the God's will take notice eventually like they did with me. When I was kind of wasting time and not doing a lot of what I was supposed to or following Satanism that much or at all they never came around I noticed. So all is not lost.

RayAkuma wrote:I'll thank you Hoodedcobra for your direct words.
I've just got a single question. I was searching for runes,
Real runes not some Hollywood crap,
But I cant find anything reliable and the following JoS site for Runes seems to be down
https://www.evilgoy.org/www.angelfire.c ... mbols.html
Is there an alternative?

read everything in these sites, it should take awhile. 1-6 months of reading everyday. depending on your comprehension ability.

get into a routine of things. first thing you do when you wake up, meditate and get your morning routine out of the way so you do not procrastinate.
make this absolute, above all else, and never let anything stop you from your routine.

keep a journal or notes on every thing you do so you can see your progression.

I recommend affirming to yourself every morning and night affirmations of motivation and health.
find some articles that really motivate you and read them regularly.

take this life and the knowledge the Gods have given us seriously.


you might have to make some sacrifices, like not hanging out with friends as much not playing games as much or watching tv/internet as much but whats more important that or working on your soul?
https://www.bitchute.com/channel/SajDEf33UJd3/
https://worldtruth.video/@SeedTheTruth
https://www.vidlii.com/user/TheTruthSpeaker
https://archive.org/details/@seed_the_truth
https://Veoh.com/users/SeedTheTruth
https://gab.com/TruthEverything
https://twitter.com/SeedTheTruth
https://mega.nz/#F!61IjhSSb!LK2piEUWSzzvUJfZopoNIw
Work in Progress.
Top
Post Reply
6 posts • Page 1 of 1