The Jew(Roter Singer) who burned 17,000 hectares of forest,how was him judged?

The Jew(Roter Singer) who burned 17,000 hectares of forest,how was him judged?

Hello people, this happened a long time ago in Chilean land but it is a remind for how the Jews mock our justice systems around the world. I will do a summary using bullet points and the translation you will find it below.

How did the Chilean Justice reacted to this and what about the Israeli who did this?
Here is the summary:

*The Jew did not want to be judged so he offered $10,000.
*The Chilean authorities did all the possible to lay off the judgment.
*The Jew avoided being sent to prison by giving $8,460 to the Judge.
*Now the Israeli is working for a Jewish OMG called Keren Kayemet LeIsrael which is about planting trees in Palestinian land so the Jews can settle(the article stated the OMG will care for the Chilean forest but it was to fool the Chilean people and make them believe a Jew will care for a forest he destroyed)
*A pro Jewish cuck stated the punishment was based on obsolete laws and that the Jew must have payed $264 and stay 60 days in prison because $8,460 is an inhumane amount of money.
*A Chilean law was suspended and the Jew did not have to stay in Chile and wait for a future judgement so he flew to Israel and now is working for the OMG.
*This accident and tragedy for Chile resulted in the death of 7 Chilean people and 17,000 hectares of forest...but the Jew was not judged for the 7 goyim he accidentally killed because non Jews are cattle. 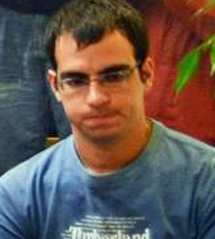 The Israeli who caused the fire in Torres del Paine pays € 7,530 to not be tried

The Israeli tourist Rotem Singer, who was tried for unleashing last December a devastating fire in the National Park of Torres del Paine, in the Chilean Patagonia, has reached an agreement to avoid the trial by paying 10,000 dollars (about 7,530 euros ) and help in a reforestation campaign.

According to the Prosecutor's Office, the Court of Letters and Guarantee of Puerto Natales, in the southern region of Magallanes, ratified on Wednesday the agreement between the Public Ministry and the youth to suspend the procedure against him.

Roter Singer.Roter Singer.
Rotem Singer, 23 years old, was accused of starting a fire on December 27 in that National Park, Biosphere Reserve, where the fire has already burned some 17,000 hectares and has not yet been completely extinguished.

According to witnesses, Singer caused the fire by burning a piece of toilet paper, although the tourist denied being responsible for the fire.

As part of that agreement, Singer delivered to the court this Wednesday 4,850,000 pesos (about 7,530 euros) to compensate for the losses and expenses suffered by the National Forestry Corporation (Conaf).

In addition, the Israeli citizen must work as a volunteer between one and two years for the global NGO 'Keren Kayemet LeIsrael', a specialist in reforestation and who has a delegation in Chile.

Specifically, Singer must coordinate a special campaign called 'Torres del Paine, from black to green', destined to collect resources to reproduce, in the nurseries that Conaf has in Puerto Natales, a minimum of 50,000 plants of native forest species to reforest the park. For this, specialists of the same NGO will travel to Chile during this year and will work in coordination with the Conaf.

With this decision, the precautionary measure prohibiting the Israeli from leaving Chile was also lifted.

The regional prosecutor, Juan Agustín Meléndez, congratulated the agreement and criticized of "obsolete" the Forest Law, since in case of conviction, the maximum penalty would have been 150,000 pesos (235 euros) and 60 days of suspended prison (without going to jail).

"Using a modern legal tool that contemplates the Code of Criminal Procedure, which is the conditional suspension of the procedure, far exceeds the punitive scenario that we could expect in the event of a conviction," he explained.

On the other hand, the Prosecutor's Office was able to prove that the fire that took place on January 5 cost the lives of seven brigade members in Carahue, on land owned by a forestry company, in the Araucanía region, was intentional, since 16 simultaneous bulbs

The Chilean government had defended the thesis of intentionality and the Minister of the Interior, Rodrigo Hinzpeter(Rodrigo belongs to a Jewish family,but this is unrelated, goy), related the incident to a radical organization of the Mapuche indigenous people(it is not my Chosen people, it is never the Jew but other races), although he later denied having established such a link.

The Executive announced that it would apply the Antiterrorist Law to those responsible for the fire, which consumed 1,800 hectares.

And what about the US media?
This (((media))) states the Chilean authorities and all people accusing the Jew are just conspiracy theory makers and they are using the Jew as a scapegoat.
Here I leave it to you the (((news)))

Israeli accused of being a scapegoat, it is never the Jews, why don't you get it?
https://www.telegraph.co.uk/news/worldn ... egoat.html

Andinia plan is a conspiracy theory,goy. It is not like Jews will create a second Palestina in South America,totally unrelated.
https://en.wikipedia.org/wiki/Andinia_Plan
Top

This is a daily occurence worldwide with them.

Andinia Plan? interesting,.. I have never of this until now.
http://www.donblankenship.com
Top

HP. Hoodedcobra666 wrote:This is a daily occurence worldwide with them.


It is disgusting how Gentiles defend such parasites.
Top
Post Reply
4 posts • Page 1 of 1